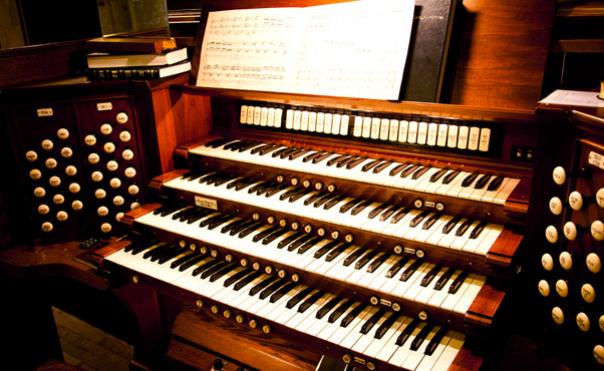 We invite you to let your soul sing as you share in the many dynamic and diverse music opportunities at United Parish.

Lent 2013
During Lent we had a joyful interfaith collaboration with Temple Shir Tikva where we shared our traditions and sang together.

Christmas Eve 2012
During the 5:30 p.m. Family Service the Cherub and Carol Choirs sang as they participated in the telling of the nativity story.  Beginning at 7:30 p.m. a Chamber Choir of about 16 singers sang music of Benjamin Britten and Stephen Paulus, as well as traditional carols and newer arrangements.  This 30-minute concert prelude featured harp, oboe, and choir.  During the 8:00 p.m. Service of Lessons and Carols the Chamber Choir was joined by trumpet and the Youth Choir.

December 9, 2012
United Parish's Chancel Choir was joined by the choir of First Church in Cambridge and Director Peter Sykes in one of our annual collaborations.  Together, the choirs sang some of the musical gems of Advent - most for double chorus and a capella.  The choirs sang together again at First Church on December 16th.

Thanksgiving Service 2012
All of our choirs came together - the Cherubs, the Carolers, the Youth Choir, the Chancel Choir, and the Handbell Choir - to lift their voices in thanksgiving.

November 4, 2012
On All Saints Sunday, 25 trombones from the Boston University Trombone Choir accompanied hymns and provided special music along with the Chancel Choir.  Familiar folk melodies such as I'll Fly Away and I Bid You Goodnight adorned our time as we wrote the names of loved ones into a memorial prayer book.

The Son of Man by Kareem Roustom was commissioned by the United Parish in 2008 and presented in 2010, in collaboration with Boston's GLBT classical chorus Coro Allegro and their Artistic Director David Hodgkins.

“Lay by your harps and gather close around me,
I would repeat His words to you,
And I would tell you of His deeds,
For the echo of His voice is deeper than our passion.”

With this passage from the opening movement, The Son of Man begins weaving its music and poetry to create a modern choral masterpiece, commissioned in 2008 by the United Parish in Brookline. The oratorio is based on Jesus, the Son of Man, a collection of poems by Kahlil Gibran that consider the nature and influence of Jesus Christ through the eyes of 79 characters, real and fictional, who could have known him. The composer, Syrian-born Kareem Roustom, chose the poems narrated by Phumiah, the High Priestess of Sidon; Benjamin the Scribe; Mary Magdalen; John the Baptist; one of Mary’s neighbors; and Kahlil Gibran himself to tell the story of Jesus of Nazareth - one of the most influential religious and political figures of all times.

Mr. Roustom’s music heightens the meaning of Gibran’s poetry, and the poetry and music unite to present a bold new perspective of the biblical Jesus, an artistic blending of the Near East and the West. The music so perfectly captures the meaning and drama of the poetry that it compels us to hear – and understand -- what Gibran felt the world had yet to truly learn about Jesus, the Son of Man.

The process of bringing this composition to life was extraordinary for the United Parish community. Through poet and composer, we encountered a bold and radical Jesus, we were challenged far beyond our abilities, and we truly were transformed.