In addition to the direct involvement we take in outreach activities, both as individuals and as a church, from time to time we feel called to express our commitment to social justice by speaking out as a body on issues of importance to our society and the world.

In January 2013, the members of United Parish took just such a position, voting in a special All-Parish Meeting to send a letter to all our elected representatives expressing our concern over the level of violence in our society (as evidenced by the shootings in December 2013 in Newtown, CT) and asking them to work on effective measures to strengthen gun safety and mitigate gun violence.

As a public service, we have compiled links to some of the more informative resources on this issue, which can be accessed here.

In this one-thing-after-another news cycle, many of us have become intimately familiar with the Sarah Everard murder earlier this month, and are now lamenting the shooting rampage in North Georgia on Tuesday that took the lives of eight people. While Sarah’s name has quickly become a rallying cry for women, while journalists have reported widely on the Atlanta shooter’s life and supposed motivations, we lament that our mainstream media has not nearly as widely lifted up for public grief and mourning the names of those who died, including the six Asian women targeted by the shooter. Let us all now take a moment to pray for the lives and loved ones of those whose names have been released so far:

And the four as-of-yet unnamed victims

We also pray for our Asian and Pacific Islander siblings who are experiencing fear, grief, and rage; for courage to call out anti-Asian stereotypes and biases within ourselves and in others; and for those who perpetrate violence and violent rhetoric against marginalized groups because of their own fear and anger - that we might all be part of the repentance and repair necessary to achieve God's shalom here on earth.

While we know that this recent rise in anti-Asian violence has been incited in large measure by xenophobic rhetoric and misinformation about the Coronavirus pandemic over the last year, we also know it did not begin there.

Our country has a shameful history of racist acts towards the Asian community that includes the Chinese Exclusion Act of 1882, the U.S. incarceration of approximately 120,000 Japanese Americans during the Second World War, the forced migration of refugees from U.S.-led military conflict in Southeast Asia,  post-9/11 surveillance targeting Muslim and South Asian communities, ICE raids on Southeast Asian communities and Asian-owned businesses.

Our Unitarian Universalist siblings remind us, “We know these acts of violence are rooted in the same white supremacy and hate that takes the lives of Black, Indigenous, and Latinx people. White supremacy culture works hard to pit marginalized communities against each other to prevent the formation of powerful coalitions. We must condemn media narratives that cast this as a “Black vs. Asian” issue. We need to affirm the interconnectedness of Black and Asian communities and all people who are against hatred—and recognize that this discrimination was born of the extremism that hurts us all.”

Our faith affirms the inherent worth and value of every human being, the interdependence of our communities, and our responsibility to act in service of justice, compassion, and peace. Let us therefore join together in a coalition of lament, solidarity, prayer, listening, and action:

Some steps you can take today:

In faith and lament,

Students continued their nationwide gun safety campaign with more school walkouts on April 20 – the 19th anniversary of the Columbine High School mass shooting (13 killed, 20 wounded). Columbine highlights the so-called “gun show loophole” that exempts 40% of gun sales from background checks. The two teenage shooters were too young to purchase guns from a licensed dealer, so a girlfriend fronted for a private sale at a gun show. The girlfriend later said, “It was too easy” -- that she would not have helped if there had been a background check that listed her as the purchaser. [Source: Adam Winkler, “Gun Fight: The Battle Over the Right to Bear Arms in America” (2011), pp. 73-76] Learn more about how United Parish is involved in advocating for gun safety here or by contacting stretchingintojustice@upbrookline.org.

The teenage leaders who organized the “March for Our Lives” in support of gun safety laws deserve our respect and admiration. They received strong support from the United Parish congregation at this past Saturday’s march and rally on Boston Common. Present were: Matt and Nicole (the newest United Parish members), Cyrus, Anna, Melanie, Priya, Seanna, and Nick (our youth contingent), Kent & Amy (our Pastors), Alicia, Mary, Chad & Kendra, Beverly & John, Merle & Peter, Paul & Kathy, Dave F., David R, Anne, Linda, and Julie (apologies to those we missed).

Support for gun safety legislation is not new at United Parish. The month after 28 children and adults were shot dead at the Sandy Hook elementary school in December 2012, a special All Parish Meeting voted to send a letter to the Massachusetts congressional delegation. Sadly, the steps we urged then are still awaiting action in Congress now. The lack of a political response after still more mass shootings have occurred underscores the importance of the voter registration effort undertaken by the organizers of the March.

Two items worthy of special note have occurred in the few days since the March. Citibank announced it would incorporate rules to restrict gun sales in loan agreements with its clients – another positive response by business leaders to the students killed in Parkland, Florida. Second, retired U.S. Supreme Court Justice John Paul Stevens called for the repeal of the Second Amendment, while pointing out that common sense gun regulation was considered consistent with the Second Amendment throughout our history (NY Times 3.27.18). 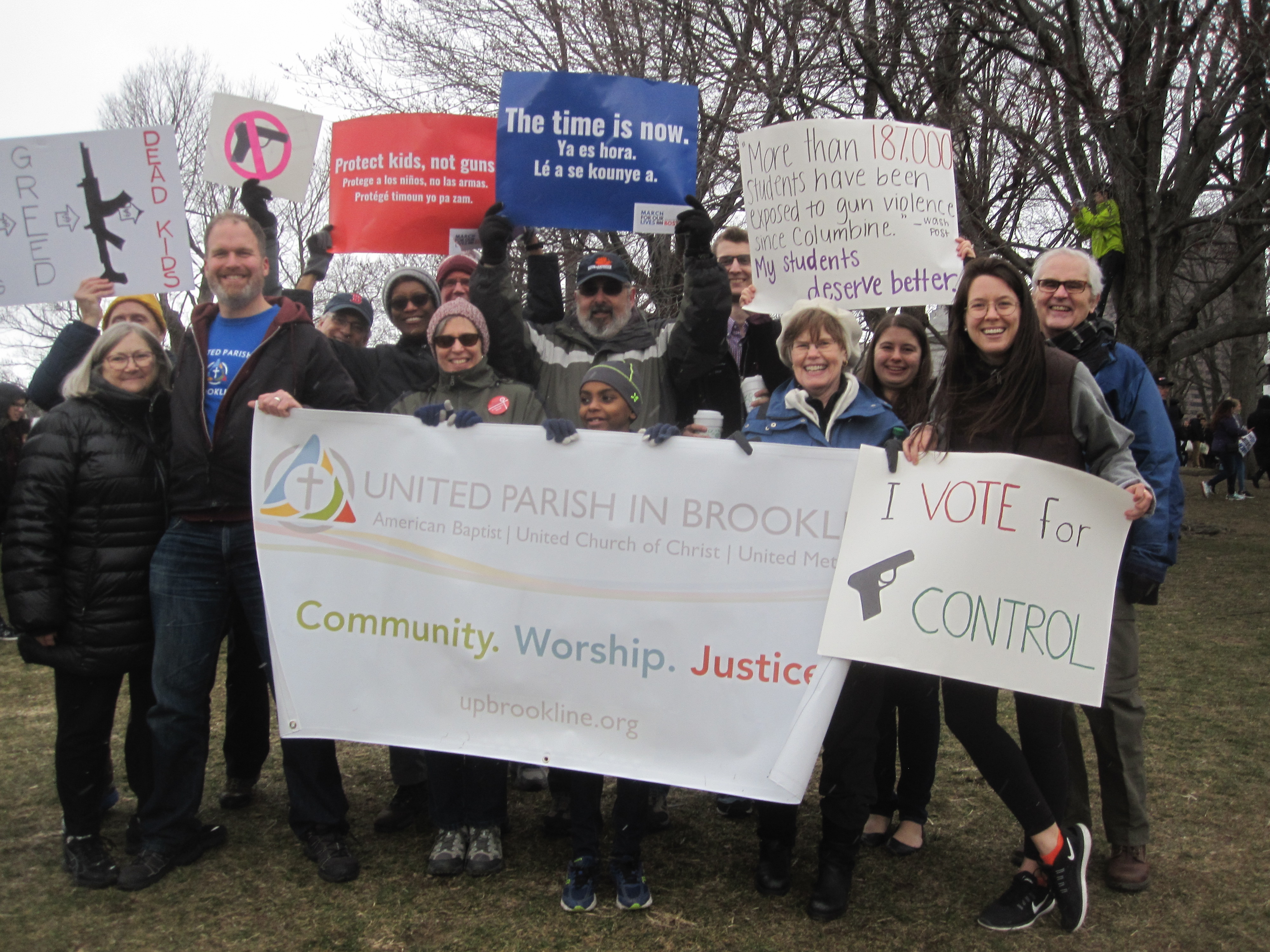