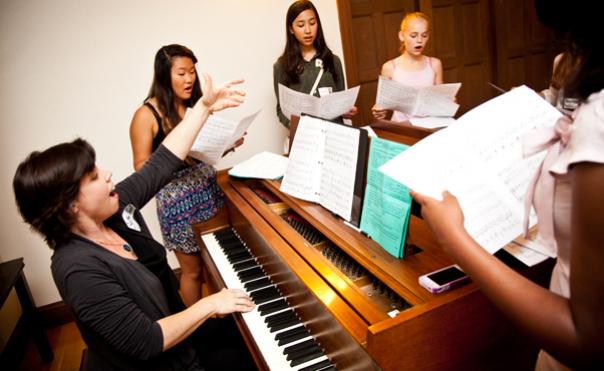 Music is at the heart of our worship and community life here at the United Parish.

We love all kinds of music, from folk styles and African drums to both ancient and modern classical music. We take our music-making seriously and joyfully: Sunday morning music connects with the themes and scriptures used in worship; musical selections reflect the diversity in our community.

Believing that music penetrates the soul in ways that nothing else can, when we lift our voices in song, our hearts, minds, bodies, and spirits become instruments tuned to sing God’s praise; and when we listen to great music, we enter God’s time, shaped by melody, measured by rhythm, adorned by harmony.

Our choirs are open to all who desire to sing -- experts and novices. We are eager to learn and expand our horizons, and look for ways to ensure that new sacred music of the highest quality continues to be written and performed in our church.

Many of our songs of worship are drawn from the culturally diverse and inclusive New Century Hymnal. We complement these hymns with other styles of music, including Anglican Chant and music of Taize -- always seeking music that best meets the sacred moment.

Our historic organ, once played by the world renowned concert organist, E. Power Biggs, is a product of the Great Depression, when E. M. Skinner's small company obsessed over each and every detail. Ours is one of the few remaining originals. This romantic orchestral organ (complete with harp and an echo organ located in the chapel) is our primary instrument of worship, capably handling most styles of music, breathing life into the squarest of hymns. As not all music is best served by the organ, we often use the piano, African drums, handbells, and other instruments to glorify God.

"While E. Power Biggs seems not to have minded at all his dismissal from Christ Church, his absence from Sunday-morning commitments proved only temporary. In May 1935 he became organist and choir director of the Harvard Congregational Church of Brookline (now Brookline United Parish). This church differed from the two he had previously been associated with in that it was not Episcopalian. As part of a “non-conformist” denomination, its services and theology were perhaps more palatable to Biggs than those of the Anglican tradition, which he never seemed to have cared for. In addition, his duties there were lighter, consisting of one Sunday service and the rehearsal of an adult choir, plus weddings, funerals, and whatever concerts he wished to prepare. A further attraction was unquestionably the church’s 1932 Aeolian-Skinner organ, a sizable four-manual instrument showing the influences of both Ernest Skinner and G. Donald Harrison, which admirably met Biggs’s needs for a suitable practice, teaching, and recital instrument. Presumably the church also had a more lenient attitude toward the occasional protracted absences that his concert commitments entailed (and for which Biggs always provided a well-qualified substitute).

In January 1936 Biggs concertized in Washington, D.C.; in February he was off to the West Coast again, for a somewhat more extended tour, which included Claremont, Stockton, and Redlands colleges; Grace Cathedral in San Francisco, and several churches in Oregon—all again to favorable notices. On his return he gave a recital in his new church in Brookline under the auspices of the Massachusetts (now Boston) chapter of the American Guild of Organists; and in April, sponsored by the local Bach-Brahms Society, Biggs gave his first recital in Methuen, Massachusetts, on an organ with which he was subsequently to have a long association, as teacher, performer, and recording artist."

Launched on October 31, 2021, the Negro Spiritual Royalties Project is an initiative of the United Parish in Brookline that will collect "royalties" when we sing Negro Spirituals (more commonly known as African American Spirituals) in worship. Unlike other hymns and worship music, Negro Spirituals were not published until after the names of their creators were long forgotten, if they were ever even known. Negro Spirituals were spontaneously created, or improvised in groups, by enslaved Africans in the U.S. These songs are a witness to the horrors of slavery and racism, as well as a just and merciful Christianity. They are also the work of a people that systematically generated beauty in response to unimaginable hardship. And since their creators never benefited from their work, our church is committing to an ongoing practice of acknowledging the creators of Negro Spirituals, and making a financial contribution (through our plate offering) to the development of Black artists and musicians at the Hamilton-Garrett Center for Music and the Arts in Dorchester. It is our hope that by engaging in this practice we will find deeper historical and spiritual meaning in this wonderful and complicated music while making room for healing. We appreciate your participation through your offering. Learn more.

Read a blog post from Minister of Music Susan DeSelms

Read the sermon transcript or listen to the audio recording or watch the worship recording on our YouTube channel from October 31, 2021.

Read the article in the Brookline Tab, November 2, 2021

Listen to and read the transcript of the NPR Weekend Edition story, January 8, 2022

If you'd like to contribute to this initiative, please donate here.

To make a donation to the Negro Spiritual Royalties Project, you can donate directly to Hamiton-Garrett Music and Arts at https://www.hamiltongarrett.org/donate